I'm so proud to unveil Helen's finished illustration to accompany my song 'Ballad of Lance-Segeant William Stones' for the 'From Coalfield To Battlefield' project for the upcoming DLI Research and Study Centre 'When The Bugle Calls' exhibition about the Music of The Durham Light Infantry. In the meantime, I'm really looking forward to tomorrow's recording session with the Ferryhill Town Band, when they will be recording a full brass band arrangement for my song 'The Durham Light Infantry', in the wodnerful venue of Mainsforth and District Institute, Ferryhill, with my great friend, producer and arranger Iain Petrie engineering. 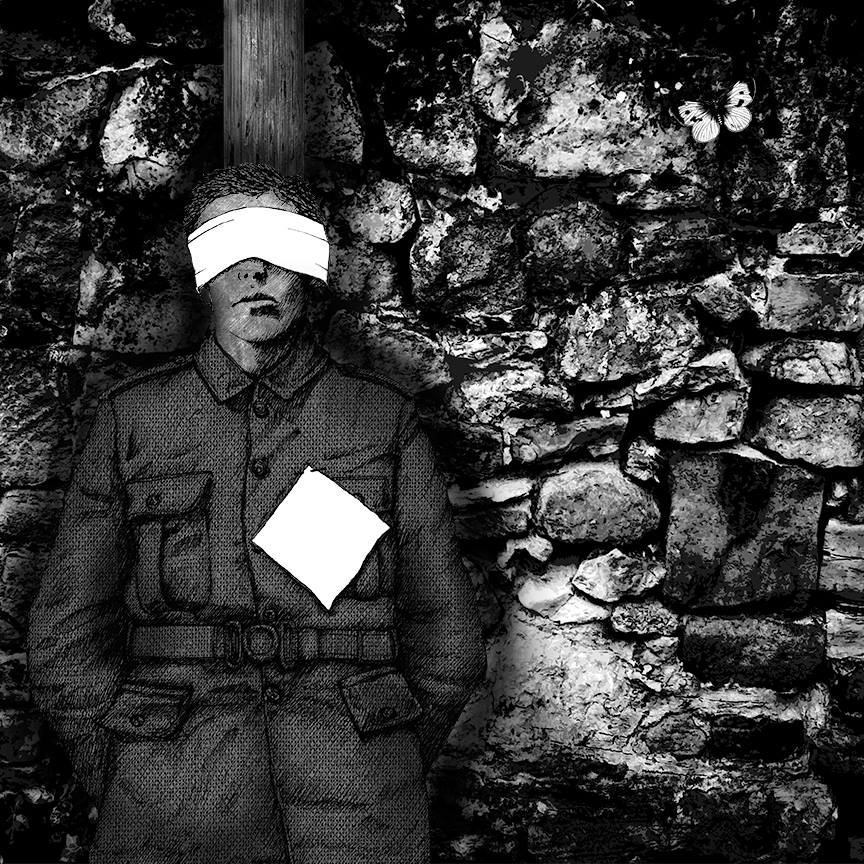 Listen to my solo version of the song here.

My name is Joseph William Stones

The life-blood of Durham ran deep in my bones

A miner from Crook standing all of 5' 2"

Deemed too short to fight, fit only to hew

But I then joined the Bantams in 1915

A volunteer in the Durham Light Infantry

A lance-sergeant decorated for extreme bravery

The terror of the guns I bravely defied

The horrors of the trenches I somehow survived

Only to face death by a different name

Stripped of all honour, butchered in shame

Though my superiors cast glowing testimonies

I was guilty as charged, my Court Martial decreed

British Army justice, so cruel and so vague

As the sentence was passed my stomach turned weak

But they’d given me no permission to speak

I simply stood there as my glazed eyes gazed through

The blank faces of my judges who no mercy knew

Driving us to our doom at the dawn of the day

A farmyard near Arras, the last place I saw

So quiet and peaceful amid the horrors of war

Twelve for each prisoner, how could they fail then?

Afraid of guilt’s burden, what else could they do?

As the firing squad officer his pistol he drew

And our brains and our souls to eternity blew

“Braver men I never have met”

Were the words of the chaplain who wrote with regret

How he’d prayed with us before that fatal dawn

And how we were murdered on that terrible morn

There were no birds to sing, no bugle to play

The Last Post as they carried our bodies away

Just a sad mournful breeze to usher our souls

To the Great Unknown, where no guilty bell tolls

Oh Lizzie, my Lizzie, you were victimised too

"There’s no pensions for coward’s widows", they told you

As they left you to rot and go quietly insane

Alone with your memories, your loss and your pain

Three hundred and five others were damned just like me

To walk the Ghost Road through eternity

These doomed youth an anthem and peace were denied

Unjustly condemned, shot by their own side

My name was erased from the family line

To be rediscovered and restored after time

Now eighty years after I was slaughtered in shame

The local memorial at last bears my name

A Royal Pardon was granted at last

Ninety years after the sentence was passed

And even though the conviction remains

I suppose we must welcome any small gains

A cause that in my time was simply unknown

From the evil of War we will never be free